If you wanted to take a coast-to-coast road trip in the U.S., you’d be able to fill ‘er up at some 168,000 gas stations says FuelEconomy.gov. If you wanted to do that drive in an electric vehicle (EV) you’d find about 22,000 public charging options that don’t take all night to get the battery juiced up. Depending on which vehicle you’ve purchased, you could only use a fraction of those stations.

A lack of standards and accepted communications protocols are among the key reasons an EV charging station may or may not fit your car. Even if it does, will it fit your schedule? Maybe not. As the Center for Automotive Research stated last November, “To encourage EV adoption, it is essential to increase the supply of both public charging geared toward long distance trips on highways and charging in residential and office areas.”

“To encourage EV adoption, it is essential to increase the supply of both public charging geared toward long distance trips on highways and charging in residential and office areas.”

For those of us who don’t have plug-in vehicles yet, the U.S. Department of Energy has a nice graphic explaining charging technology in its report titled Enabling Fast Charging: A Technology Gap Assessment. Here’s a modified version of that graphic:

It’s those fast chargers that can make EV adoption more likely. “Studies have shown that in areas where drivers have access to 50-kW or 120-kW fast charge stations, annual electric vehicle miles traveled increased by over 25 percent, even in cases where fast charging was used for 1 percent to 5 percent of total charging events,” noted the authors of the above-mentioned DOE report when talking about electric vehicles powered only by their batteries (BEVs). “Having access to these fast charge stations can help alleviate the ‘range anxiety’ commonly cited as a reason for consumer’s hesitation to buy a BEV.”

Even if EV owners gain access to charging infrastructure, a lack of standards still makes charging a cumbersome business.

First, there’s a difference in the actual ports of various vehicles and the charging plug that fits into it. Tesla plugs work only on Tesla vehicles. Several car manufacturers support CHAdeMo – which is short for “charge de move.” They include Honda, Mitsubishi, Nissan, Subaru and Toyota. Teslas can plug into CHAdeMo ports via an adaptor. Then there’s the Combined Charging System or CCS, which is supported by Volkswagen, General Motors, BMW, Jaguar, Daimler, Ford, Hyundai Tesla and Kia, among others. Some car manufacturers support multiple standards, but generally there are adaptors for the consumer to fiddle with at the charging station. 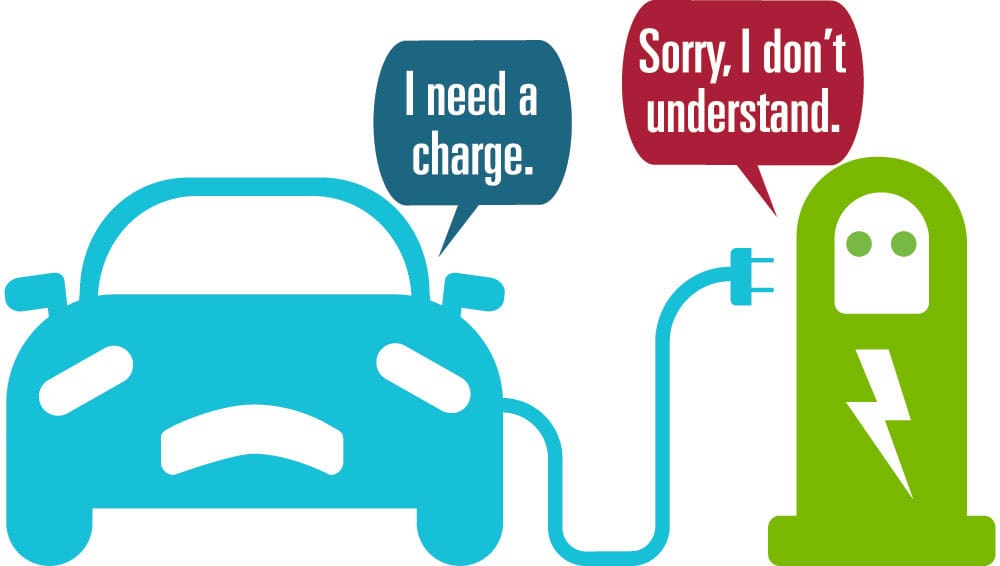 “Beyond the port itself is the communications between the vehicle and the charging system,” says Tom Ashley, vice president of Policy at Greenlots, a global provider of vendor-neutral EV charging software and solutions. Just because the plug works at a charging station, that doesn’t necessarily mean the charging station will talk to your car.

As a case in point, here’s an anecdote from a journalist who recently test drove a Jaguar I-Pace. “I searched for nearby charging stations and found a SemaConnect station a few blocks from where I was headed. I plugged in the I-Pace, gave my credit card number and … watched it give me an error code three different times. It simply didn’t want to take a charge from this Level 2 unit,” wrote Kirk Bell of GreenCarReports.com. The reason? Today’s charging stations frequently use their own proprietary billing systems, and only consumers who have an account with the charging station can plug in and have electrons flow.

In the absence of standards, some industry players are crafting their own solutions.

For instance, Greenlots recently partnered with Hubject, a company that provides e-roaming solutions to facilitate consumer-friendly EV charging. The two organizations are developing a communications method to allow drivers to plug in and automatically have authentications and payment information transmitted without the need to swipe a card or fiddle with a smartphone app. The fix is based on ISO 15118, a vehicle-to-grid communications standard.

Ashley adds, “Another aspect of this interoperability ecosystem is how drivers access charging … not the ports on the cars but the apps and the networks.” Put another way, many public charging stations require some sort of contract between drivers and the station operators. Again, industry players are working on solutions. Last year, Greenlots created a driver roaming agreement with ChargePoint that “basically allows a pathway for a driver with a ChargePoint account to access a charger on a Greenlots network and vice versa,” he explains.

Still another area where standards could be helpful is in the communications between charging infrastructure and utility systems that manage distributed energy resources like EVs. Even though vehicle-to-grid, charge-and-discharge capabilities are still evolving, EVs are likely to be a load that utilities will want to control.

When the Edison Electric Institute (EEI) teamed up last year with the Institute for Electric Innovation (IEI) to forecast EV sales through 2025, the researchers concluded that, “Annual sales of PEVs will exceed 1.2 million vehicles in 2025, reaching more than 7 percent of annual vehicle sales by 2025.” Additionally, the researchers expect to see some 7 million EVs on the road by the end of 2025, and they think about 5 million charging ports will need to be in service to support them.

Not surprisingly, scientists at the National Renewable Energy Lab (NREL) predict big load growth ahead, mostly due to electrification of the transportation sector. While utilities have limped along with nearly flat demand in recent years, NREL sees electrification in all sectors ratcheting up consumption as much as 38 percent. Almost all of the increase will come from charging demands of EVs. 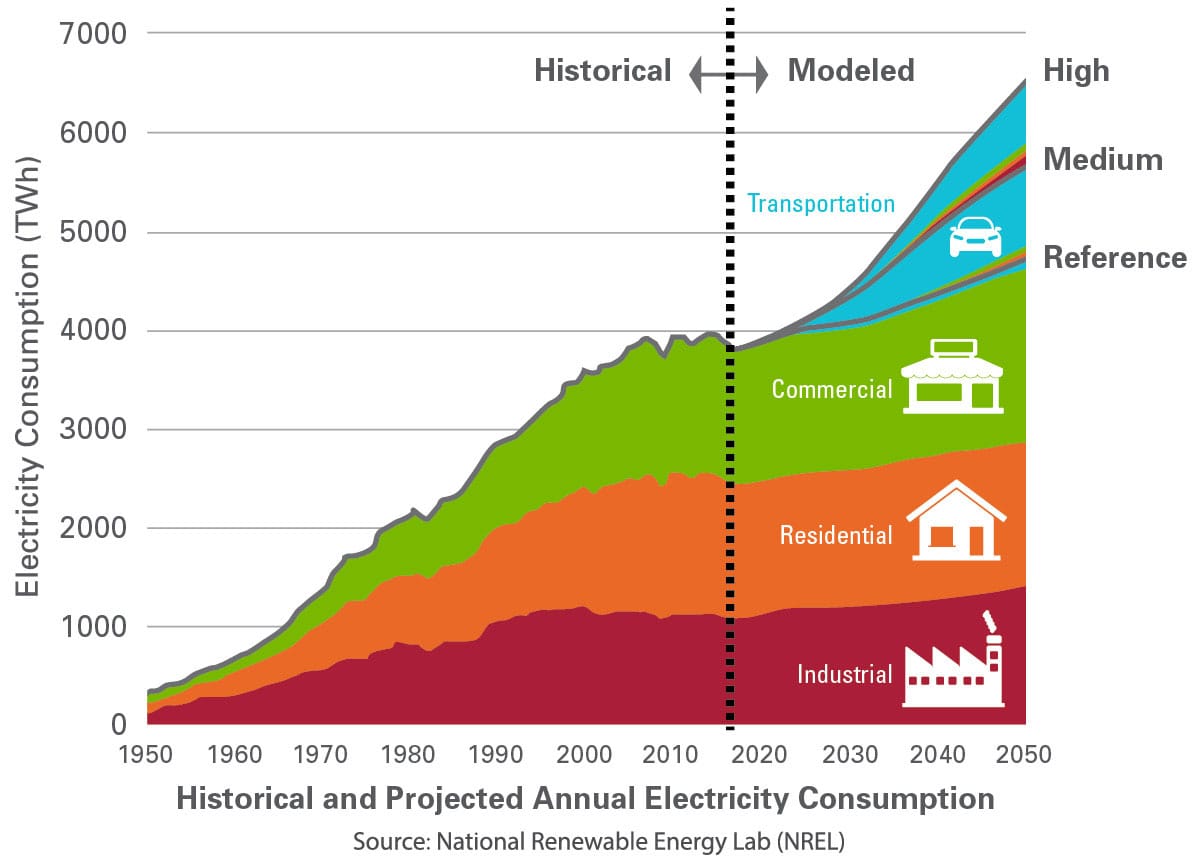 “When well managed, EV charging load is arguably the single most effective way that utilities will be able to manage the distribution system going forward,” Ashley says. “Being able to lower or curtail charging during peak periods or charge during periods of over-generation can bring the grid into better balance and maybe mitigate or minimize the need for peaking facilities.”

That’s going to take interoperability and technology, some of which hasn’t yet been developed. Let’s hope standards and interoperability solutions come soon. And, when they do, let’s hope they fit today’s car charging challenges better than a Tesla plug fits a CHAdeMo charging port.